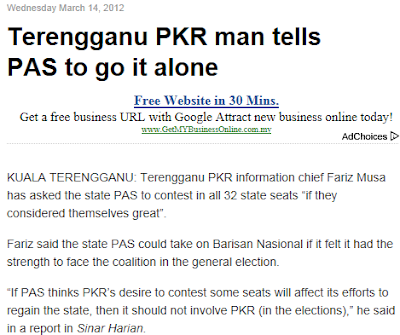 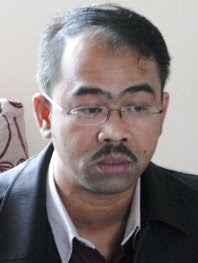 Terengganu PKR information chief Fariz Musa has asked the state PAS to contest in all 32 state seats “if they considered themselves great”.
Fariz said the state PAS could take on Barisan Nasional if it felt it had the strength to face the coalition in the general election.
“If PAS thinks PKR’s desire to contest some seats will affect its efforts to regain the state, then it should not involve PKR (in the elections),” he said in a report in Sinar Harian.
He said it was better for Terengganu PAS to contest all the seats if they felt they were superior and if they saw PKR as being a liability.
Fariz said several state PAS leaders were crude in their statements when they spoke about the state PKR’s intention to contest in 11 state and three parliamentary seats.
“There is no need to discuss to have a consensus on the distribution of seats between PKR and PAS. On behalf of PKR, I want to thank PAS for the remarks which were hard-hitting and humiliating.
“They can take all (the seats),” he said.
Fariz stressed that PAS had not been able to embody the spirit of co-operation in Pakatan Rakyat as it questioned PKR’s ability to contest the seats in the state.
“The leaders are under the impression that they are the pillars of the Opposition in the state and that they have better support at the grassroots level than PKR,” he said.
Fariz said it was not a crime for any party to contest a state or parliament seat in the state based on “political wisdom”.
Maknanya bukan sahaja PAS bedil PKR tetapi PKR juga kini membedil PAS!